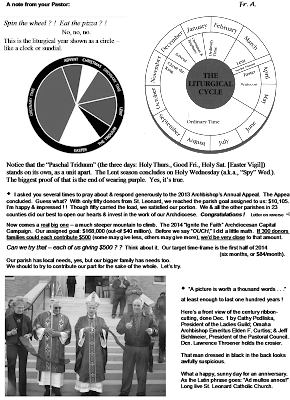 Posted by St. Leonard Parish at 2:57 PM No comments: 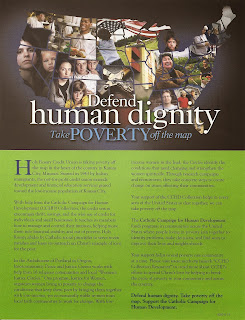 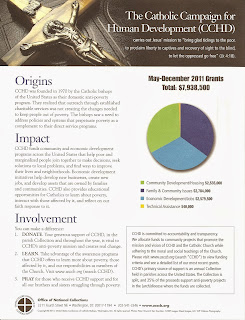 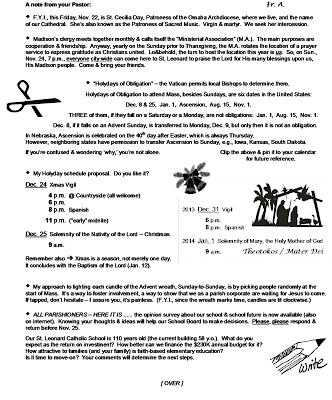 w  If you haven’t yet, please pray about & respond generously to the Archbishop’s Annual Appeal.
(When we enter 2014, the larger “Ignite the Faith” capital campaign will begin & I’ll give a fuller explanation about that.)
w  This gem below was written recently by a pastor in Omaha in his bulletin.  A sin everyone everywhere should avoid.
“ Gossip:  One of the things that tears at the fabric of a parish is gossip.  People talking & pulling things down, complaining, bickering, you name it.  Gossip is like tearing open a feather pillow in a 25 mph wind — you can never retrieve all the feathers.  The negative talk does not help.  Many people in this parish give so much to make the place hum with positive activity, but a couple complaining words wipe out whatever good was done.  And it takes the wind out of the sails.  When I hear of such talk I get discouraged & my energy level is sapped.  And there is no way to respond to the gossip because, like the pillow feathers, they just get scooted along & kept in the air by others.  Gossip is another way of saying: rash judgment, detraction, calumny.  Rash judgment is assuming as true, without sufficient foundation, the moral fault of a neighbor.  Detraction, without an objectively valid reason, discloses another’s faults & failings to persons who did not know them.  Calumny are remarks, contrary to the truth, that harm the reputation of others & give occasion for false judgments concerning them.  If we all held to the high principle of making sure our words never ventured into these three sins against the 8th Commandment, we would all do a lot less talking. ”
w  A CENTURY STANDING  . . .  on December 1, 2013, St. Leonard will mark the hundredth anniversary of its building.  A testament to the endurance of faith.  Honoring the celebration with his presence will be the Archbishop Emeritus of Omaha, Most Rev. Elden F. Curtiss.
The following is a historical sketch from archived newspaper clippings.
****************************************************************************************************
Among the pioneers who organized the Catholic faith in Nebraska were Franciscan priests of the Province of the Sacred Heart, St. Louis.  There's evidence of their presence in Madison in the 1870's, serving the spiritual needs of area German & Irish settlers.  But St. Leonard Catholic Church dates its actual parish origin to 1880 with the purchase of five acres of land for $100 (a spot near the location of the current parish cemetery).
In 1898, the current site was purchased for $1,200.  By 1903, after delays & set-backs, a limestone basement was built (which functioned as a Church) & a school started.  Since the Franciscans expanded their ministry to California, the priestly care of St. Leonard transferred to the Diocese of Omaha in 1910.  The first full-time resident pastor, a diocesan priest named Edward Stephen Muenich, arrived the same year.
A.D. W 1913.  The Pope was Pius X.  The U.S. President was Woodrow Wilson.  It was a year between two notable tragedies: RMS Titanic & World War I.
At a cost of $75,000 for bricks, lumber & spikes, construction of the new (upper) Church began with the laying of a cornerstone -- a cube of Vermont marble -- on May 8, 1913.  Work was completed for dedication on December 4 of the same year.  The architect was Jacob M. Nachtigall of Omaha.
Faith caused oxen to haul & human muscles to mortar the materials that shape what is now St. Leonard Catholic Church: 110 feet tall & one century old.  Quite an achievement.  The hard work of laborers & the sacrifice of parishioners way back then have endured.  Could they have imagined their investment lasting this long, the 21st Century?  Rough mathematics, this building has glorified God with well over 40,000 Masses.
Thanks be to God.

Posted by St. Leonard Parish at 2:44 PM No comments: 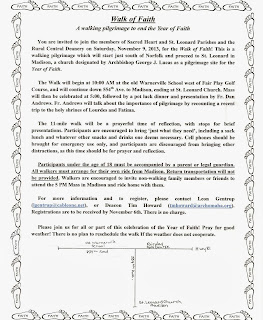 A note from your Pastor:                                                                                                                  Fr. A.
w  What’s new?  This page!  Considering the limited space of this bulletin & my potential wordiness, from now-on if I have remarks (titled: “A note from your Pastor”), it will be as an insert.
w  The shelves of Madison’s Food Pantry are nearly empty.  Let’s pitch-in & re-stock items there, especially toiletries (soap, tissue, diapers).
w  If you haven’t yet, please pray about & respond generously to the Archbishop’s Annual Appeal.
(When we enter 2014, the larger “Ignite the Faith” capital campaign will begin & I’ll give a fuller explanation about that.)
w  As a public witness & to cap the world-wide Year of Faith, Norfolk’s Sacred Heart Pastor, Fr. Dan Andrews, is organizing a “walk of faith” (“camino de fe” in Spanish) on Nov. 9 – from Warnerville to here, St. Leonard (ending in time for our 5 p.m. Mass, then a pot-luck & slide-show).  It’s an eleven mile distance using county roads.  Sound interesting?  Would you like to participate?  Think about it, circle the date on your calendar & lace-up your sneakers.
w  Regular media & the Catholic Voice covered the tragic story of Catholic teens involved in a car crash near Gretna earlier this month: a boy dead, 15; and two girls injured, 15 & 16.  God rest his soul.  God aid their healing/recovery.
Regardless of the circumstances of what happened, this is the underlining truth.  That morning, all three were healthy, energetic, beautiful – no problems.  By evening in a vehicle, one perished & two seriously hurt.  Then everybody cried.
If we love our children, what more efforts can we do to ensure that they stay alive?  Aren’t they worth our constant protection?
My point isn’t about predicting the future: “if we only knew what was going to happen.”  The future can be shaped by us now, controlled by us now.  Our children can be spared grief by what we adults do now.  What prevention are you going to do now?
w  I had my first Madison Tyson plant visit on Oct. 17.  My second will be Nov. 4 (a clergy breakfast).
The purpose was an introduction to the new employees from the country of Burma (a nation of southeast Asia, between India & Thailand).  Typically, these new workers are quiet, but they have a complicated culture.  Let’s extend a welcome to them.
w  Norfolk AseraCare Hospice had a clergy breakfast the other day.  It was to appreciate those in ministry & explain the positive, life-affirming aspects of hospice.  If you don’t know what Asera can do, find-out how good it is.  You’ll be surprised.
w  The Oct. 18 issue of the Catholic Voice, front page, focused on the reverence for the dead & funerals.
The complete liturgy of Catholic burial has three parts, or better said, movements: vigil (wake), Mass & committal (cemetery).  The format is contained in the dark-blue book you see the clergy carry: “Order of Christian Funerals,” approved & published for the U.S. in 1989.  So, that’s the standard we must follow.
All Souls Day (Commemoration of the Faithful Departed) is Nov. 2 (side-by-side the Solemnity of All Saints, the day prior).  Mass here that Saturday is 9 a.m.
w  Our “Husker Hoe-Down” fundraiser is Nov. 23.  Tix are disappearing!  Get yours.
w  Attention all parishioners . . .  Very shortly you’ll receive an opinion survey to fill – about our school & future of our school.  Knowing your thoughts & ideas will help our School Board to make decisions.  Please respond to it.
w  Last Thursday I received a fone call from Nativity Catholic Church, Sioux City, IA.  It would like me to talk history to the R.C.I.A. candidates there on Jan. 23.  I’m flattered by the invite.  I’m glad I have a talent to offer. 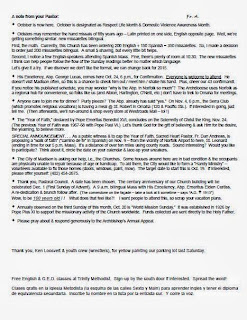 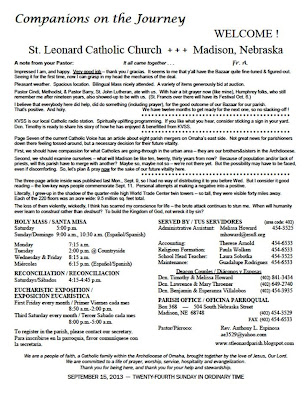 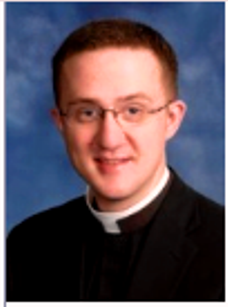 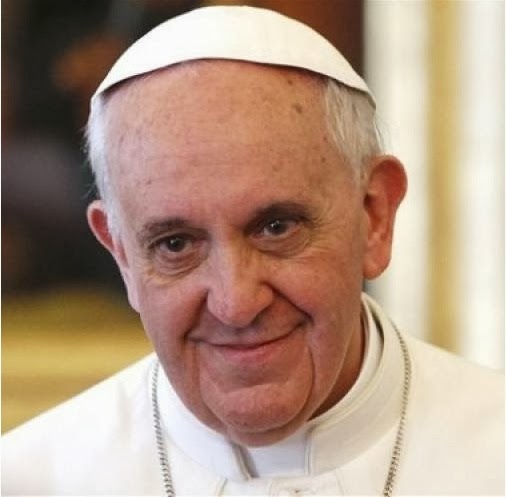 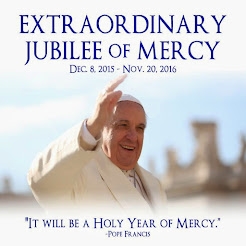 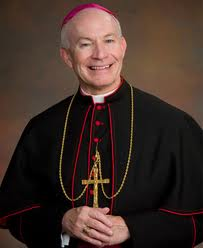